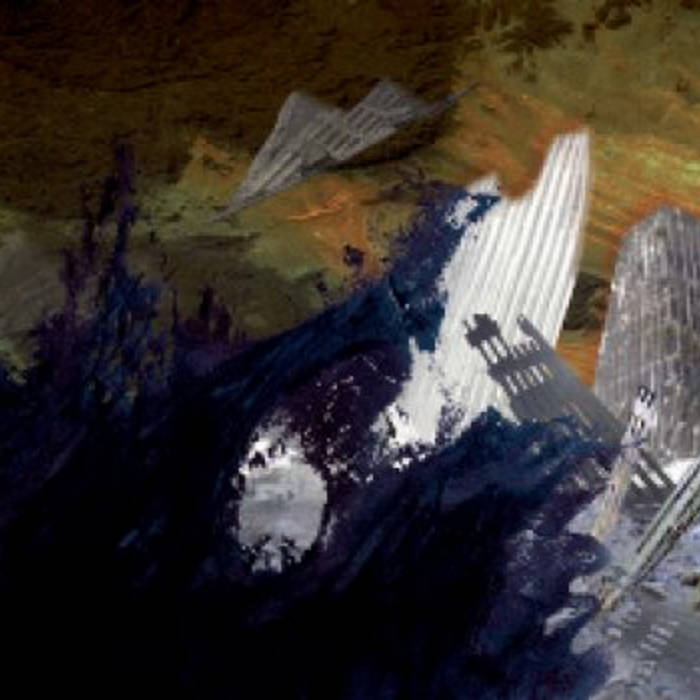 A collaboration with Jo-Anne Green

9.11.01 Scapes was composed to accompany a series of collaged images created by Jo-Anne Green the day New York’s World Trade Center was attacked. Green’s palette consisted of NASA images of earth and photographs of diatoms and ground Zero. Each Scape consists of multiple layers. Thorington used the layers' titles, and the texts that accompanied the NASA images to weave her multilayered narrative for the Notes; and much as Green used found 'pigments', Thorington used found sounds to create the soundscore for the series. 9:11:01 Scapes was the winner of an Honorable Recognition, Prix Bohemia Radio Festival, Czechoslovakia, 2003; and the Winner, Aether Festival, KUNM-FM, Albuquerque, New Mexico, 2003.


From the Scapes notes:

Simultaneous world time supplants time of a successive character.
In a moment of temporal compression, my lover in Boston becomes my eyes.
I'm listening to the news, she emails. One of the World Trade Center Towers is on fire-- apparently a plane crashed into it.
I turn on the TV. Center screen a grainy Dan Rather speaks solemn, silent words from a black and white window. All other channels are down.
Boston, Virginia, Maryland, London, Paris, Egypt, Russia, see what I cannot from my New York City home


Helen Thorington is a writer and sound composer, whose radio and sound/music compositions have been aired nationally and internationally for the past twenty-five years. Thorington has created compositions for film and installation that have been premiered at the Berlin Film Festival, the Whitney Biennial. She has produced three narrative works for the web and played a principal artistic role in the cutting-edge performance work, Adrift, Thorington has also composed for the Bill T. Jones and Arnie Zane Dance Company. She is the founder and co-director of New Radio and Performing Arts, Inc., the national weekly radio series, New American Radio (1987-1998) the Turbulence and Somewhere websites, two internationally acclaimed blogs: Networked_Performance and Networked_Music_Review. and networked, a [networked book] about [networked art].